Since 1875 Ed McCauslen’s Florist has kept not only the name but the legacy of hard work & full time commitment to our customers. In the beginning Ed & his brother Bus McCauslen took the business from their mother Martha Huscroft (Huscroft Florist) and renamed the business to Ed & Bus McCauslen Florist.

Ed McCauslen retired in the 1960’s and Harvey Thomas along with Harvey’s uncle Charles Harvey took over & purchased the business. With keeping the name & the same values as he was taught from Ed and Bus, Harvey Thomas continued to run the business, & with his wife & children by his side and created a family owned business.

Harvey’s son Harry Thomas always had a dream of continuing in his father’s foot steps. After coming home from the Marine Corp. in 1986 Harry’s dream was fulfilled. Harry went to Indianapolis School of design and was taught the up-and-coming new style of designing.

Along with the knowledge of his father on how to run a business, Harry put his own design skill to the test. He developed his own repeat customers that love his work. Harry married his wife Pam in 1988 & now they have two beautiful children. His wife Pam & daughter Melissa work there as well. His son Corey went into the Marine Corp & is still defending our country today.

This just isn’t a job…this is our life & we love what we do. Your family is our family & we take great pride in sending smiles since 1875. 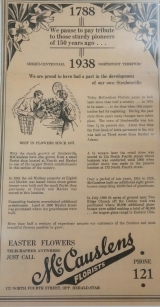 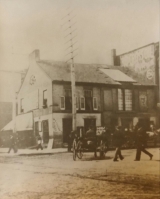 Please note - Our Online Ordering is turned off until December 27th while we are closed for the Christmas Holiday. If you need assistance, please call the shop at 740-282-4525. Dismiss